I enjoy writing Bourne Again (Bash) and Bourne Shell (Sh) scripts, I’ve got a ton of them that do various things like backup my important files, system backup and restore, automate the usage of kvm-qemu, system updates, mount encrypted volumes, etc. They can be tremendously useful and even save you time as well as serving as a form of documentation to the process.

A massive reason to love shell scripts is portability, most if not _nearly_all Linux systems have Bash or Bourne Shell. So when you write a good quality script it will run across many different systems, even on older versions of the shell with some exceptions. If one were to want to learn how to script with BASH here are some resources I have compiled that would help with doing so.

Here are some of my scripts:

Automating the kernel emerge, eselect, compile, configuration copying and detection, hardware detection install, etc along with grub configuration updating to save some effort when installing, upgrading, or trying a new kernel. 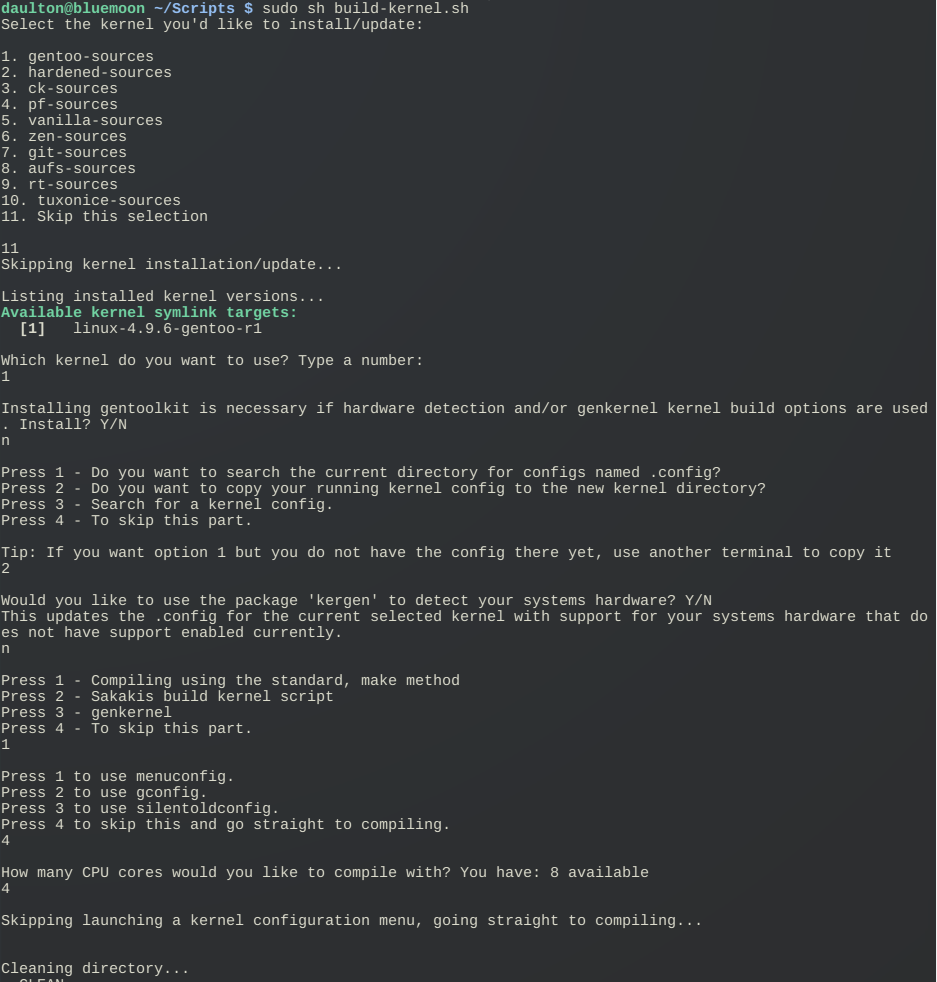 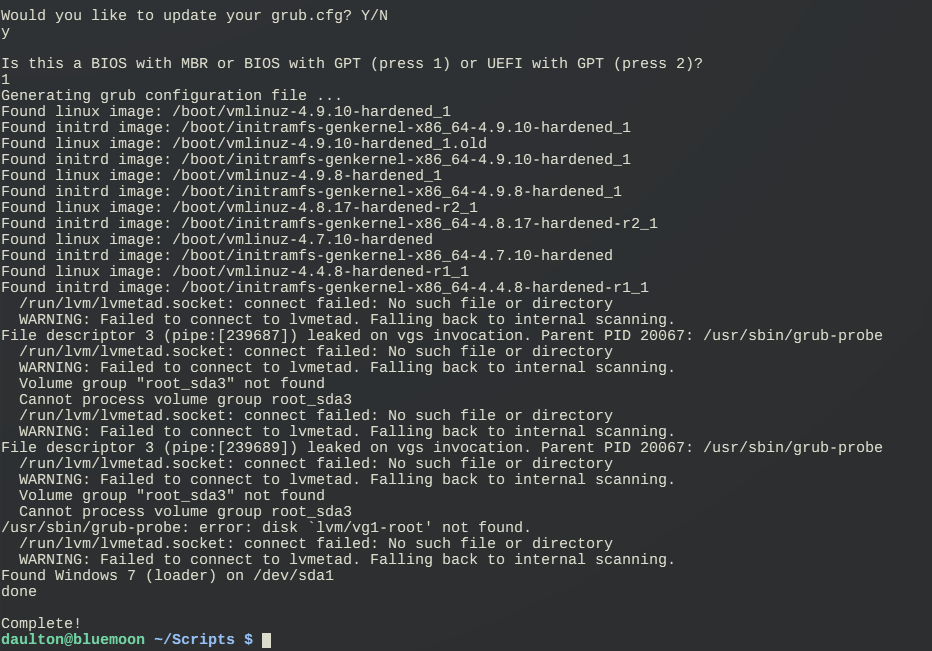 The purpose of this script is to make basic use of kvm-qemu easier for personal usage. It doesn’t try to do everything, it does however do a broad amount of things that are necessary for basic creation and usage of virtual machines.

Some features include; Virtual disk and machine creation, run virtual machines menu that additionally launches the network script at run-time, disk resizing, snapshots both the creation and changing of them as well as deletion, reinstall operating system, etc.

For more detailed information please refer to the README on the gitlab page.

The purpose of this script is to make the backup and restoration of Gentoo systems easier. This is achieved by having a convenient menu, both backup and restore capable, and minimal interaction aside from setting a few variables before being ran.

This script could be adapted to be used on other distributions if one were to edit the chroot_commands.sh script to reflect the commands that need to be ran for your distribution to install and configure GRUB. That would fairly easy, so if you are not using Gentoo but need a script like this give it a go.

The purpose of this script is to make mounting truecrypt containers simpler and easier.

While there is TrueCrypt and VeraCrypt GUI programs that will fulfill this, those who prefer to maintain a light system may prefer a script instead or merely prefer a simple solution to a simple job.

This makes backups very quick and easy after you get your paths in the variables section set. What is great about rsync is by default does not copy a file if it exists without having been changed, by default this behavior is based on time stamps and file size, so this means you can run this script and only what has changed will be copied. 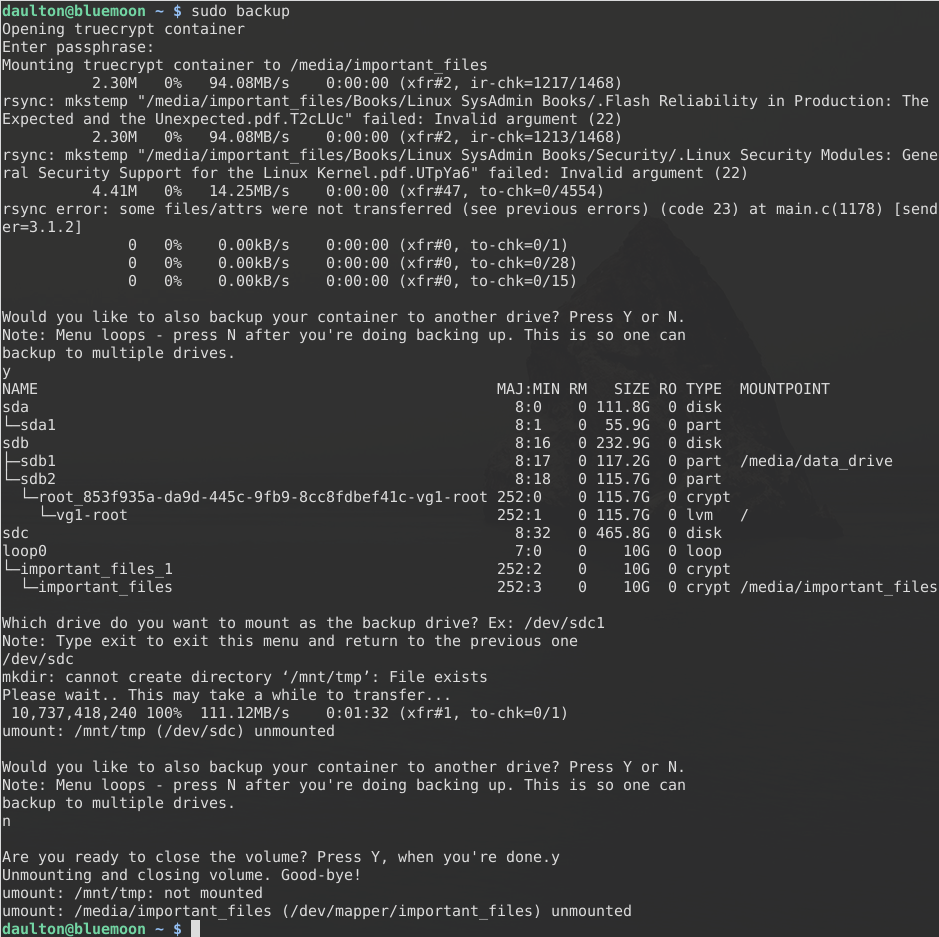 The purpose of this script is to just be a simple script to run after uninstalling packages to clean the dependencies or wanting to clean portages leftovers from previous emerges. There is a couple extra handy things like emptying the trash, cleaning /var/tmp and /tmp, checks the system for compliance with Gentoo Linux Security Advisories, empty browser cache, etc.

This is a configurable iptables firewall script, meant to make firewalls easier.

Note: This script is originally intended to be a restricted firewall, operating in a default deny sort of manner where it is very locked down. Since the beginning it has been expanded, allowing default policies and variables changed as the user desires through the options given. This allows you to suit the firewall to your needs better.

This script requires you to fill out the variables in configuration.sh to your preference before running it. Otherwise it will not work as it is missing information is requires to properly set the firewall.

If your rule changes sever your connection, say you were on SSH but forgot to allow it, automatically your most recent rules will be re-applied.

By default before each time the script is ran your existing rules are saved. There is a companion script called ‘restore-iptables.sh’ that will restore your iptables rules back to those before the new rules were set. It saves an original copy of your rules the first time the script is ran, so long as that file exists still it will create time and date stamped rules files each time after to give you a selection of which point in time to restore your rules to.

This script is super simple, it is intended to make basic git usage even easier and quicker then it already is by launching the script following a couple prompts, done. 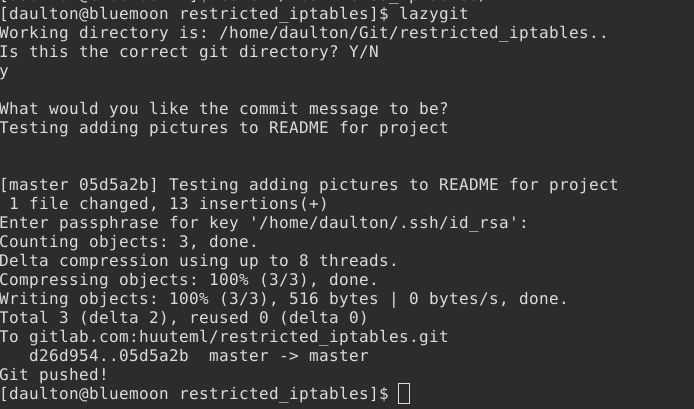 A rsync backup script to be ran scheduled by cron. It supports logging and backing up to both network share and locally attached storage which can be set in a variety of combinations

This is a script to install Gentoo in a partially interactive manner, it gives a baseline install configured with Gentoo itself, a kernel, bootloader, some necessary applications, etc. while giving the flexibility to be prompted for desktop environment, display manager, along with locale, time zone, usernames, passwords, hostname and other user selections.

The intended use is that first your partitioning is done as you wish, you run the script and it handles everything up the point of configuring the fstab or any additional options your grub configuration may require.